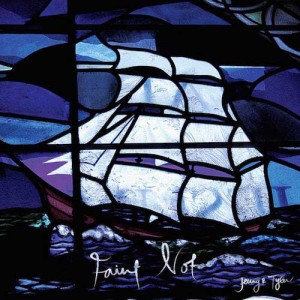 Jenny & Tyler is a musical duo that fit together so perfectly it’s hard to believe they weren’t paired by a music manager. In fact, they are a husband and wife team who have just released their third record, Faint Not. Every track on the album is beautifully done, with well-balanced harmonies and delicate yet powerful arrangements. The pairing of Tyler’s folk-meets-adult contemporary style and Jenny’s injection of country creates an appealingly non-specific sound that will appeal to listeners across multiple genres. In terms of the individual tracks, the album offers an assortment of love songs, story songs, and spirituals to choose from.

Perhaps the best word to sum up the album is ‘loving’, and not simply for topical reasons. Whether towards society, each other, or God, the one thing that permeates the album is love, and not in the sense so often used in pop music. This is not the fleeting love more accurately described as lust. In fact, As Long as our Hearts are Beating expresses the emotion in such an honest and whole-hearted way that it actively renews the romance of marriage as a commitment based on love, not an institution based on convention.

The title track, which now has an accompanying music video available online, is a prime example of the lyrical strength of the album. Evocative from the very first line, thoughtful and thought-provoking, this is a song that tells a story we all regularly witness but often choose not to see. Yet the message is not pretentious. In fact, nothing about this album is. Jenny and Tyler never vie for attention or compete for the lead. There is a complete lack of ego in their arrangements and it is an impressive rarity in an industry where ego can be an artist’s bread and butter.

The album is not uniformly uplifting, however. Through Your Eyes is heartbreaking and yet you are never sure why, as the lyrics paint a portrait without ever handing out details, leaving the listener to fill in the blanks in a way that makes identifying with the song difficult to avoid. This increases the power of the song and yet also intensifies the ache in one’s chest as the final words fade out.

The production on the whole is clean yet warm, most notably in Holding on to Hope, which breaks down into an elegantly chaotic cacophony of melodies that still fit together beautifully. Contrasting this is the lo-fi final track, Stop Staring at Me, which is a bonus track of sorts. It caps off the album in a way best described as ‘cute’, and yet rather than stepping the album down, if anything it confirms and reinforces that this is an album written about love by people in love.

And perhaps this is why the album works so well and tugs so hard at the heartstrings: regardless of lyrics, melodies, harmonies, or production, this album instills an emotion in the listener, and that is not a thing easily forgotten.