Fun fact: I did some reflective writing while I was in Newfoundland. Below is a collection of disconnected mini-essays. I aspire to be a writer, and you, dear readers, are invited to peruse this writing exercise.

I went to the mall. It seemed like a waste to go to a mall — Toronto certainly isn’t lacking sprawling temples to consumerism, but I went anyway. In my defence, there was still an aspect of nostalgia. I had spent a year and a half working at that mall, and while I wasn’t the biggest fan of my manager, the job itself was pretty good. I had also spent a lot of time there with friends. We had seen countless movies, laughed too loudly in the food court, and walked endless kilometres back and forth between stores to buy absolutely nothing. It was never a depressing destination. Rather, it was a convenient place to socialize, shop, or simply avoid class. That mall was one of the main reasons I failed French 1500.

While I was there I went to a restaurant and read a magazine while I ate. I killed some time at a bookstore where I picked up two more novels to add to the unread pile next to my bed. I took myself to a movie which I’d wanted to see but for which I’d failed to make the time (but, being on vacation, I now had all the time in the world). Sitting alone in that theatre I felt lighter than air. The entire world slipped away as the lights went down, and I sank into my seat while Andrew Garfield smile bashfully at Emma Stone.

The entire night felt like a date with myself. In a certain light that’s sort of depressing, but at the time it didn’t depress me. It made me realize how infrequently I do anything nice for myself. I rarely take a night — or even an hour — off, and when I do I spend most of that time feeling guilty for not being more productive. I go to concerts to unwind, but I schedule them like appointments. I give myself three hours of permitted recreation at a predetermined time and place. My whole life is a set of errands. I never give myself any room to breathe. I am a workaholic: I am perpetually either at work, planning future work, or regretting that I am not currently working.

While it’s nice that I could spend part of my vacation breathing, I realized I don’t want to have to wait for my next thousand-dollar week to do so. I’m desperate for oxygen, and yet I’m the one holding the pillow against my face.

By the time Peter Parker sat down in class and waxed philosophical about breaking promises, I had made one to myself. One that I, unlike Peter, intended to keep: breathe. 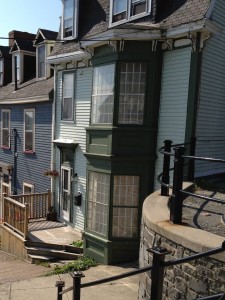 My friend Leon had a theory. He called it The Box Theory. Many people run away to reinvent themselves — a new city, a new job, a new group of friends; a blank canvas on which to repaint yourself however you’d like to be. The only problem with running away is that sometimes you have to go back, and when you go back to a place, you go back into The Box. You become the person you used to be, not just in the eyes of your former acquaintances, but inside yourself as well. The way you talk, act, and feel all revert to former habits. No matter how far away you go, your old self is always waiting for you back where you started.

I remembered Leon’s theory as I meandered through streets I hadn’t seen in four years. More so when I climbed a hill I hadn’t walked in ten. I felt the layers of myself competing against one another. On Empire Avenue I was all at once a 29 year old woman on her first vacation ever, and a 19 year old girl using university as an excuse to run away from home. Standing in the United Church parking lot I was the responsible adult who was proactively addressing the sadomasochistic whims of her own biochemistry, and the 23 year old unemployed university graduate who was turning her back on her first love because of a silent war raging in her mind. Watching the ducks on the dock of Long Pond I was letting go of a love which had dried up and blown away, and tumbling head over heels into it at the same time.

I let some things in. I let in the freedom. I let in the simplicity. I felt those layers and I wrapped myself in them. Other layers I let fall. They were fragments and memories. I left them on the streets and sidewalks on which they’d first formed.

I lived in St. John’s during six of the most tumultuous years of growth, discovery, stress, and self-realization of my life. It’s a complicated Box with many compartments inside. I already know I’ll reopen it every time I go back, but now I know what waits for me in its corners, and, having stepped out and looked at them from new angles and perspectives, I’m okay with them all. 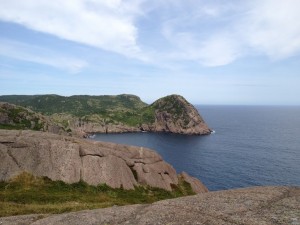 There is a short interval at the tail end of twilight, right before the entire horizon is swallowed up in blackness, when both ocean and sky are the same luminescent azure. It’s hard to tell if the sky is swirling down into the harbour, or if the ocean has flooded the sky.

I used to say I’d love to move back to Newfoundland, but now I’m not sure if I would. When you live in a place, you slowly forget its magic. You see it day in and day out and it becomes ordinary. Like a lingering smell, eventually your brain tunes it out to make room for new smells. It’s an important function. New smells could mean anything from danger to a new potential mate.

Your eyes aren’t all that different. You still see your surroundings, but you don’t notice them. The jellybean-coloured houses, dormered mansard roofs, and sparkling water begin to fade. They blend into the background to make room for changes and otherness.

By the time I was ready to move away from Newfoundland, the cliffs at the ocean’s edge were ordinary. Now, four years later, they’re beautiful and other than.

I will never live here again. But I will always visit. 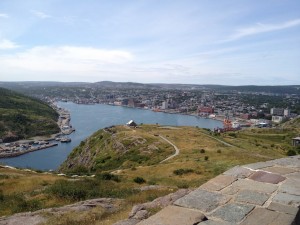 The sad part of a vacation isn’t the end, it’s the knowledge that within a matter of days you will wake up back where you started. You will get up at the beckoning of an alarm clock you hate more for its familiarity than its purpose, and go to a job which, regardless of whether or not you enjoy it, you would rather not have to do.

As you sit there your mind will play a trick. It’s the same trick it used to play every September when you went back to school and felt as though you’d never left. You’ll remember the events of your vacation, and sense that they were recent, but you will not perceive their interruption in your life. They will be set apart, occupying a space which exists somehow in tandem to your “real” life.

Even as you muddle through your first day back, you will feel the weight of the years behind you and the decades ahead. You will love your vacation up to its very last moment. It’s your mind you will resent.

I had wondered, “should I or shouldn’t I?” for a week, trying to find a convenient time, but always giving in to a more convenient excuse. On my final morning I finally realized, convenient or not, I had to go. I needed to say goodbye. I needed to see it in the sun, when the romance of silence and moonlight couldn’t creep in along the edges and tell me beautiful lies.

It was as if the ducks had been waiting for me. A few turned their heads as they sat on the dry dock, but most just ruffled their feathers at the sound of my shoes on the wooden planks and waited for me to finish what I’d started years ago.

In the light of day it was still beautiful. The water was a deep, navy blue. The tall grass alternated shades of yellow and green, gold and emerald. In the distance I could see a few rooflines, the fluvarium, and city hall. Scattered in between were joggers and hikers, benches and rocks.

But not him. Not her. No one I’d been with and no one I’d been running from. Nothing I’d buried nor anything I’d refused to allow to die. It was just a lake.

This is where I came to say goodbye, not just to the people or the place, but to the things I’d blamed on both. I blamed my curses on demons, and convinced myself that I must have them exorcised. But the demons were already gone. They’d been gone for a year. For five years.

So here I am at the edge of a lake. I am not haunted, I am simply sick, and saying goodbye is simply a step towards my cure.