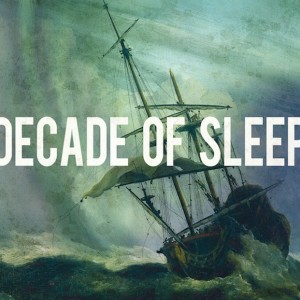 Just over a year after releasing its debut EP ‘Morning Sun’, Toronto-based band Decade of Sleep has returned with an eponymous full length follow-up album.

Fans who have been waiting for this release will not be disappointed. The strong songwriting, well-executed instrumentation, and energizing feel remain, buttressed by improved production quality, nearly twice as many tracks, and perhaps the band’s greatest achievement: a sense of voice.

Whereas Morning Sun was a great rock album, Decade of Sleep is a great Decade of Sleep album. The songs are more aurally distinctive, giving listeners a feel for what kind of music this band is really about: rock.

But this isn’t the staid, scared-to-defy-our-fathers’-rock sound that so often pops up in the “rock band” market and sends groups running to niche genres to escape the blandness of the label. This is what the spirit of 1960s rock sounds like in 2010: full and gutsy and energizing. It isn’t angst, nor does it pander. This is what your insides sound like in 4/4 time.

For those discovering Decade of Sleep for the first time, expect classic rock riffs played in blues-inspired guitar tones, vocals that bleed seamlessly between smooth verses and edgier choruses, and percussive patterns that keep the four-beat measures from ever going stale by pushing and pulling just enough to keep the ear intrigued.

All of these features shine through in the album’s first single, Sympathy. The track is perfectly paced, letting you nod your head and smile as lead singer Phil Laffin takes you through verses saturated by imagery and into choruses that wink with just enough sexuality to lure your ears into reciprocal flirtation.

The entire album, despite slower songs and moments of heavier instrumentation, manages to keep the listener feeling as though he or she were enjoying a homogeneously upbeat collection of tracks. Northern Lights, the shortest track on the album at just over two and a half minutes in length, stands out by showcasing this energy early in the album.

Thereafter the band keeps you on a similar high even as, three songs later, you dip into Ocean. The opening threatens a ballad, but the track rolls like its namesake into a straight-ahead rock song before fading though various intensities and textures, lapping beautifully onto the shores of Stronger in the Broken Places.

The band’s blues influences are mostly strongly heard in Call for the Vicar. The track positively bleeds attitude while showing off Decade of Sleep’s firm grasp on an all too frequently overlooked concept: the importance of space. Without ever sounding thin, the band happily drops unnecessary instruments to feature the ones that matter: well chosen guitar tones playing vivacious riffs, the rough timbre of a voice that doesn’t need to say “screw you” to get the point across, and drums that clearly indicate just how badly you want to hear what comes next.

The final song on the album is the best candidate for “ballad” status. The heartbreaking lyrics are sung over major chords, combining lamentation with optimism, and closing the album with a track that both stands apart and somehow fits right in.

As good as the album is, seeing the band live is even better. The audience gets to see just how perfectly the upbeat energy of the sound reflects the passion of the band. Guitarist Lance Schibler plays with all the energy of a champion air-guitarist rocking out to his favourite band, grinning all the while as though marveling at the fact that the guitar is real and the band is his.

It should be noted that so many paragraphs of praise do not a perfect album make. The weakest link in the chain is perhaps Fool Heart, with lyrics drawing so heavily on idioms that it becomes difficult to stop hearing the words and simply enjoy the music. As well, being so completely “rock” may end up being a hindrance to the band as it makes them but one small fish in a very large pond. Not rough enough around the edges for garage rock, too true to form for experimental, and too upbeat to be hard rock, the band must sit amongst the myriad of available rock bands, raising their hands only half-way when the teacher calls out for blues-inspired rock.

Perhaps the closest available match is prog rock, and indeed it is a good one, because as much as it is not a perfect fit, it is an imperfect fit for the best possible reasons. There are a great number of prog rock bands trying very hard to be prog rock bands, pushing the music in ways that are unnatural and border on pretentious. Decade of Sleep neglects conventions and plays with rhythmic structures in ways that seem natural to the point of being accidental; a rock band that simply happens to have progressed.

Despite the status of this fish in the grander pool, there is good reason for fans to have all the optimism they hear on this album. Two strong releases, an entertaining live show, and the drive to go further may well be enough to pull this band gradually to the forefront, giving it the chance to shine a light on what rock in this decade ought to be.