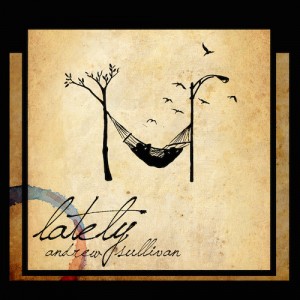 A twenty-five minute EP is not a lot of time for an artist to make a statement. One must often choose to either demonstrate a wide range, or present a limited snapshot representative of a broader catalogue. How rare a gem to find an EP that does both.

Andrew Sullivan’s Lately achieves this, showcasing over the course of just seven songs the Texan’s country-tinged songwriting style, which stirs in bouncy, adult contemporary vibes reminiscent of Jason Mraz and swaying, bluesy lamentations with equal ease. Most impressively, it’s all done while maintaining a sense of cohesion. These songs belong together, and are only as different as they are similar.

The songs seem ordered to specifically highlight the range. The straight-ahead acoustic pop of Undeniably Happy is juxtaposed against the considerably more country Quarter Past Two; the upbeat fun of Lately against All Because, a ballad that cries out for inclusion in the Great American Songbook of the 21st century. While the album has several songs that could climb their way up contemporary charts, All Because has the air of a classic about it. It’s a song that would go equally well on a first date or at a wedding, and would still carry all of its charm on the 50th anniversary.

A large part of the appeal is Sullivan’s presentation. The production quality is extremely high for a first, independent release. Even with a full band behind him, the vocals are clear and strong, maintaining the spirit of a single performer, alone with his guitar, in the midst of a warmer overall sound.

Lyrically the album maintains the high standards elsewhere set, rich with sentiment yet keeping a safe distance from sappy. There is no push or pull to get thoughts to fit into lines; the words are perfectly chosen for the meter, expression keeping pace with style and yet still slipping in syllables here and there like sidelong smiles. Perhaps the only caveat to this general truth is Whenever You’re Gone, which has a deliberate structure that starts out clever but by the final verse feels just a little too cumbersome to maintain the track’s charm.

Waving the listener off with a fond farewell is Like I Should, a track with an unexpected blues guitar line and just enough vocal slide to evoke the classic southern tone of American heartache. The final outro is a double chorus that simply reiterates without embellishment or overstatement. A final line, a few lingering instrumental whispers, and you’re on your way.

Andrew Sullivan has the songwriting skills to compose chart-worthy hits and a voice that is ready for radio. Lately, as a debut release, has the potential to open the doors to both.