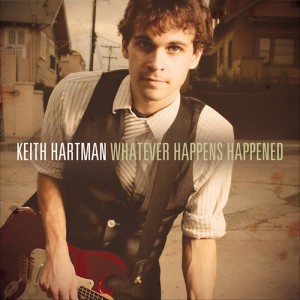 Quite often, an album will put its best foot forward, and then hope to hold a listener’s interest through shifts and variances in tempo and feel. Keith Hartman takes a slightly different approach. His debut album, Whatever Happens Happened, actually gets stronger as it progresses. The unfortunate downside to this arrangement is that rather than stepping forward with a hooky single radio stations will lust after, the album opens with an air of uncertainty.

The opening track does maintain the status quo of representing the album well: the overall tone is singer-songwriter meets indie alternative, instrumentation shifts from light acoustic to full band to unusual features and solos, and the texture of Hartman’s voice flips from smooth to rough-edged to an unusually strong falsetto. Overall the album can be summed up as ‘unexpected’. But that isn’t always a good thing.

Staying on the opener, Flurries, as an example, the guitar creates a slightly haunting feel through slides and vibrato, promising honesty and perhaps a little bit of heartbreak. The background swells and recedes, implying the imminent entry of a full band. Instead, a harmonica solo separates a new verse. Percussion does follow a moment later, along with effected vocals and another instrumental break and shift. The overall effect is somewhat disjoint, leaving an uncertainty as to whether the point was to keep the listener guessing, or if the entire track is simply a poorly executed attempt to stand out as somewhat avant-garde.

Fortunately, improvement is almost immediate. It Feels Right and Nothing New follow, each a stronger effort than the last. By the fourth track the songs start to feel radio-friendly enough to have real commercial viability. With the song structure no longer jutting out awkwardly, the range of Hartman’s voice and cleverness of his lyrics finally begin to shine. It is almost impossible to list another artist who is similar enough in style to make a worthwhile comparison, as the vocal textures, unusual structures, and unconventional instrumentations seem adamant about separating the album from much of what the mainstream currently offers.

On the whole, the album falls slightly on the weak side, being best described as “a good start”. That said, there are several noteworthy tracks worth purchasing. Election Day is a rare gem, adding choral backing to the record’s list of surprises but executing it beautifully. Evelyn throws a drawling fiddle into the mix, adding a country feel that is perhaps the album’s chance to tip its hat to Hartman’s Virginia roots. This particular influence may also be the source of the strong storytelling skills featured in String of Lights. For something more upbeat, with its fast tempo and well-executed falsetto, Minnows threatens to be almost danceable.

While there are some rough edges in need of polishing, Whatever Happens Happened has a unique character that seems equal parts indifference to overused conventions and refreshing stylistic ingenuity. You may walk away from a first listen doubting that you will ever hear these songs hit the radio, but you’ll cross your fingers behind your back hoping to be proven wrong.