The Johnston Brothers – Say When EP 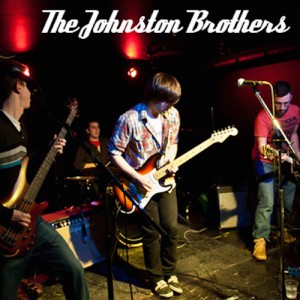 The Golden Horseshoe can be a difficult region to crack, with a high concentration of bands fighting for attention in a relatively small area. One band working their way through the maw is The Johnston Brothers. The band is currently on the precipice of plunging into a new stage of their career with the upcoming release of a five-track EP entitled Say When.

Even from such a small pool of songs, the record contains several standout tracks, most notably Caught Time and No Hand. The former showcases lead singer Christian Carlucci’s vocals, which are smooth, though with just enough texture to be emotive. The latter is a testament to the band’s classic rock influence, with strong, well-executed guitar solos; a rough-edged, garage rock vibe; and casually yet purposefully layered vocal lines that harken back to rock from decades passed. Happily, this is not an isolated case, as rock roots are given a wink and nod throughout the album.

To every upside, however, there is a downside. The rough-around-the-edges style frequently goes a little too far, pushing just past garage rock and into rock that sounds as though it was recorded in a garage. Mixes aren’t just rough, they’re unbalanced. Lead guitar lines compete with vocals, drum lines push ahead of the beat, and distorted guitar parts sound more accidental than instrumental.

Still, despite the recording quality, the band’s musicianship comes through. The songs are well-written and well-arranged, and the roughness isn’t always a hinderance. It feels deliberate and well-utilized on Caught Time, where the aforementioned rock wink and nod are played out through the insertion of a harmonica line — an instrument inexorably linked to acoustic and folk rock from the classic era. Even on Tonight, where in places the vocal line stretches above Carlucci’s natural range, lower harmonies fill out the sound sufficiently to make the stretch feel intended.

Overall, the EP is strong when taken in the context of an early release. It showcases a catchy collection of offerings that may become earworms to people with the right connections to get this band where it deserves to go. That said, the production quality will have to improve if this band wants to maintain a competitive edge in its home region. This brand of rock should always pay homage to the classic, but the band will quickly need to decide if the garage is their style, or their studio.