I joined my school choir in the first grade.

In the fourth grade I switched to a different school where I not only continued to participate in choir, but I also took structured classes in music theory and proper vocal technique.

That school also gave me five years of piano lessons, a year of recorder, and four years of violin.

For the record, I was a terrible violinist. But that’s okay, because I hated the damn thing.

Half way through the eighth grade I switched to cello. I loved the cello. It has a rich, elegant tone. It can carry a solo or fill out an accompaniment. It is a gorgeous, sensual, sexy instrument. It’s the high class escort of the orchestra. It is a proper lady, and the best piece of ass you’ll ever get.

Yep, that got weird. And I stand by every word of it.

I continued with the cello in high school (where I also spent a year on bassoon), but the instrument was provided by the school, and when I graduated I had to leave it behind. That was ten years ago.

Around that time I started playing guitar, and I loved it. Guitar was the instrument that got me into writing pop songs, and since I actually owned one (her name is Baby and she’s too good for me), it became my principle instrument throughout university.

In the years since, I’ve also acquired a fife, tambourine, bass guitar, glockenspiel, and shakers (’cause why not, eh?) but in my heart I remained a cellist.

As part of my 2012 Personal Overhaul, I decided that this would be the year that I got back into it. There’s a store not far from me that rents instruments, and I decided I would splurge and rent one for a month just to see what of my former abilities still lingered.

Then I noticed you could “rent to own” and I started to think lovely, fiscally irresponsible thoughts. I mentioned this to my roommate, who happened to have a guest over, who happened to know a guy with a cello he was interested in selling.

So I destroyed my two week old savings account and bought a cello. 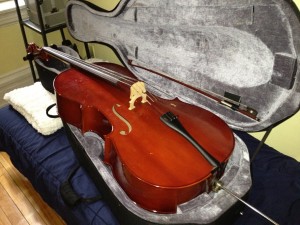 (I’m terrible at it, but I’m loving every shaky, shrill, wolf-toned moment!)