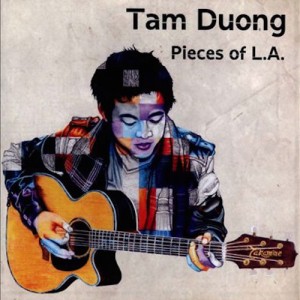 With smokey vocals, influences pulled from jazz and blues, and all of it wrapped in accessible, radio friendly pop, Tam Duong’s Pieces of L.A. is instantly addictive. The 7-track EP is the debut release from this young but ambitious singer-songwriter.

The album opens with Writing a Love Song, a delicately poppy track lamenting the inadequacy of lyrics when describing love. However there is no inadequacy in the imperfect rhymes woven throughout the song as it describes the frustrations and limitations of its own efforts.

All that effort is quickly shaken off by the fun, “I care but I don’t” vibe of Bounced Cheque Blues, which is utterly contemporary in theme yet still retains the authenticity of a classic blues track. The 20/20 hindsight of regret draws immediate empathy from anyone who has fallen victim to the pull of plastic money, which, these days, is almost everyone. This sort of mass appeal is at the very heart of the blues, which was and continues to be a genre not about escape, fantasy, or bravado, but simply life as it is. At the song’s midpoint Duong breaks into a guitar solo which would not be out of place in any vintage, smoke-filled, Chicago bar.

The album pulls from jazz in the soft, dreamy Dragons; rock in the more-bitter-than-sweet Black Widow; and traditional music in an unexpected but oddly fitting outro to Kings. Duong successfully taps each of these styles, and his own musical identity seems perfectly at home floating freely in their midst.

At various points on almost every track the lyrics skirt the line between descriptive and wordy, with stray syllables just barely making it into phrases. The closing track, Gum, has a visually evocative hook, but its lyrical namesake seems to stumble onto the beat rather than landing there.

The album as a whole centres largely on the theme of love, whether for a person or a passion. While he openly references his love of music in his lyrics, even a listener ignoring the words would feel it coming through. Pieces of L.A. is a foot put well-forward, to be enjoyed both on its own and as a sign of things to come.