Two Blogs for the Price of One! Crowds and Warped Tour

***The top half of this is your standard “How I Most Recently Bettered Myself” blog. The bottom is a recap of my experience at Warped Tour. Read one or both. Or neither, but then you’ll have wasted a mouse click in coming here at all.***

Fun fact: drugs have side effects.

Sometimes they’re manageable. The meds I’m on now made me nauseous for the first two weeks, but they were serving their intended purpose well enough that I didn’t mind putting up with it.

The pills I was on before — I recently found out — can increase anxiety levels. Some people might find that a manageable tradeoff. Since I also suffer from social anxiety disorder, I found it rather more bothersome.

Which is to say I regularly found myself hyperventilating in the toilet paper aisle while I readied myself for another kamikaze run at the baby carrots.

My mother periodically marvelled at the fact that I found the neighbourhood Loblaw’s to be a veritable torture chamber, but I had no apparent problem with standing in the midst of several hundred concert-goers, being crushed by sweaty fanaticism on all sides.

The difference is, in a concert everyone is pushing in one direction: the stage. Plus, assuming it’s a band I like (and why would I go if it weren’t?) I can get sufficiently lost in the music to avoid fully processing my surroundings.

Of course, after shows my anxiety level generally skyrocketed as part of the throng rushed to the merch table, another part to the bar, yet another to the door, and the rest surged forward to take their place at the front of the stage in the hopes that the artist would come out and say hi, or they might at least be able to grab a set list.

Last week was Toronto’s Warped Tour date. I had never been to a festival (at least not one with multiple stages, much less stages and merch booths and sponsors. Oh my) and in the days and weeks leading up to it, I did my best to simply not think about the crowd.

And oh yes, there was a crowd. The line stretched back so far that you could scarcely make out the 50-odd foot high main gates. Or rather, “lines”, since there were two, both equally daunting. Once inside there were three or four sets of stages, endless aisles of booths, periodic food carts, a port-a-potty village, and even a group of Buddhist (or something) monks, in case you wanted to chant your way to nirvana between Memphis May Fire and Sleeping With Sirens.

The crowd was not all going the same direction. It was going every direction at the same time. People showed up to sets half-way through, left a minute later to head back across the grounds for another set, and cut through meet-n-greet lines with reckless abandon. They hollered at their friends, screamed at bands, and clapped to whatever beat was loudest. The music was never not playing.

Except when it rained. Poured, actually, with thunder and lightening to boot. Everyone was rushed off the grounds and into the adjacent amphitheatre, which was designed to cover only a fraction of our numbers. As a result, many people hid bathrooms, or crushed themselves into narrow aisles, drenched and shivering, trying not to think about what part of whose wet body they were pressing against.

And I was fine.

It wasn’t even that I realized I was fine at some point during the day. It was when my friend and I got back to my apartment, she grabbed a quick shower, and I collapsed into a chair, that I realized I hadn’t even thought about the crowds. My anxiety wasn’t simply manageable, it was non-existent.

That isn’t to say I no longer have social phobias. Crowds are but one of three main categories of high stress situations I regularly face. The remaining two I will discuss in their own time.

But this one — crowds — it would appear I’ve got a handle on.

***Thus concludes the primary blog. What follows is a recap of the tour from a fangirl’s perspective.***

The line, when it finally moved, went quickly. But the hour Katie and I spent in line waiting for doors alternated between highly entertaining and soul-crushing as we caught snippets of the barely post-adolescent conversations around us. Warped Tour does not cater to 20-somethings. Much less a near-30-something like myself.

Though Brett, the guitarist for Affiance, came by to try to sell his band’s CD, and when Katie remarked that I was comparatively “ancient” he guessed I wasn’t “a day over 24”. It was probably bullshit, but it was the nicest bullshit I’ve been fed in a while.

When we got our hands on the schedule we tried to map out the day. Our first stop was Memphis May Fire, and while waiting for them to start we caught the delightfully entertaining Skinny Lister.

All photos mine unless otherwise marked.
Tumblr if you must, but please link to me.

Halfway through MMF we cut out to see our shared favourite, Twin Atlantic. This was the third time we’d seen them so far this year (in addition to a three song acoustic set by lead singer/guitarist Sam McTrusty for a local radio station) and they were, as always, fantastic. We nabbed set lists, bought t-shirts (which came with bags, shades, and lip balm. If you were wondering what Twin Atlantic tasted like and didn’t want the bother of the restraining order you’d be slapped with for licking them, the answer is ‘strawberries’, apparently), got signed posters, and took pictures with the band. The heat was weighing on everyone and I remarked to Craig (Kneale, drummer and blogger extraordinaire) that the forecast predicted rain in the morning, but it was already the afternoon. How silly of me.

Next was T. Mills’ booth for Katie, then a trip to the ATM and a hunt for I Fight Dragons’ stage. They put on a fantastic set (except for the part where I somehow sprained something in my foot. I’m still limping) which ended in the aforementioned thunder and lightening, as The Geeks Will Inherit The Earth was cut off in its final measure by a stage manager insisting upon evacuation.

Insert an hour of running for cover, lamenting our soggy and/or destroyed merch, shivering in a washroom, and huddling with strangers in the Amphitheater. That was followed by a lot of confused wandering while we waited for a revised schedule to be announced. 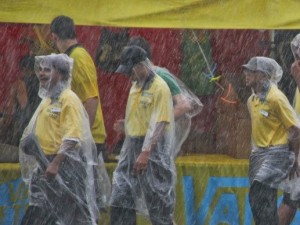 When the grounds reopened (puddle-wonderful enough to impress even e e cummings, I’d imagine) Katie caught T. Mills while I lined up for a picture with I Fight Dragons. We reunited in T. Mills’ line and waited roughly an hour for Katie to get a picture with him, lamenting our sore feet all the while. I disappeared briefly to catch what I could of Chunk! No, Captain Chunk! (who I truly hope come back soon. They put on a great show. I was thoroughly impressed by Bertrand Poncet’s vocal performance… and general attractiveness. What) and then we hiked back across the venue for Breathe Carolina. 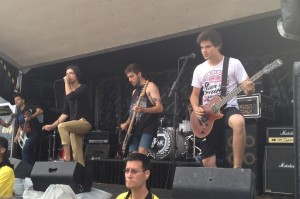 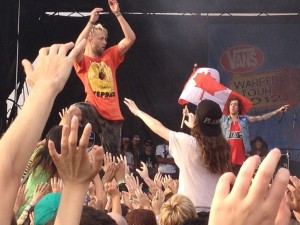 We briefly considered sticking around for Sleeping With Sirens, but were both too tired and sore to make the effort, plus Katie was being picked up at my place at a preset time, so we couldn’t stay too late.

I made a half-assed effort to find Chunk! No, Captain Chunk!’s booth, but gave up when it didn’t stumble into my path. I gave up just as quickly on We Are The In Crowd’s set, but a grabbed a couple pictures for posterity. 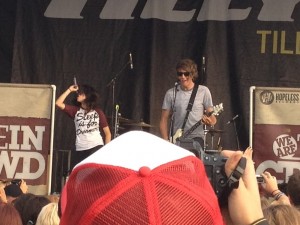 We hobbled back to the streetcar stop, burned our tongues on a hot dog, showered, inspected our merch, and as Katie was curling up in the back of her roommate’s car for the drive home, I was crawling into bed, cursing the alarm clock as I set it for 6:00 AM.