You is kind. You is smart. You is important.

I know this may shock you, but believe it or not, I have some self-esteem issues.

Mind blowing, right? A morbidly obese, cross-eyed woman who dates less often than she does her taxes who doesn’t think she’s God’s gift to the human race? That’s crazy talk!

But no, really, I don’t think too highly of myself.

It’s been a lifelong thing. I was still in elementary school when I planned my first (failed) diet. I was about eleven or twelve years old when I started thinking of body as “disgusting”. If anything, it’s a wonder it took me as long as it did to develop a full blown eating disorder.

As a kid I was bullied, and I became a bully to deal with it. I also adopted the age old coping mechanism of laughing at myself. I’m going to go on a bit of a tangent and suggest that anyone who does this — or encourages other people to do this — should stop. Now. Completely. Laughing at yourself may make it seem less cruel to the bully, but it also plants the seed that those comments are “okay”; that they mustn’t hurt you because you ostensibly find them funny. The comments never stop hurting, and with the illusion of approval they never stop coming. All too easily it can become a running joke, an internalized monologue, and eventually a self-concept.

(That said, I believe in being able to take a joke, but there’s a line between funny and cruel that’s too blurry to be casually flirted with.)

And so it happened that after a childhood and adolescence full of negative comments in the guise of humour, I grew into a woman who was convinced that she was fat, ugly, and awkward. Smart and musical, sure, but not to a noteworthy extent. I was neither funny nor important, and could reasonably expect to live out a life of social obscurity, career mediocrity, and abundant feline companionship.

I collected a few friends who challenged these views in passive ways. One in particular challenged them actively, but faced with the dissolution of my self-concept I retreated, set up defences, and hunkered down until her emotional resources were spent.

To make matters worse, one of the lovely side effects of my depression was the development of a cognitive filter. I could easily take in negative comments; I was used to them. They fit in with what I had “learned” about myself over the years. Positive compliments? Not so much. They were immediately dismissed as incorrect, insincere, or coming from unreliable sources. This filter was so ingrained I didn’t even notice it, and were I to ever look back on comments I’d received, I wouldn’t even be able to recall the positive ones. It would only be the insults that jumped forward.

A while ago I decided to challenge this. I’ve always been a fan of empirical evidence, so I sought to bypass my filter and gather data. Having upgraded from my Nokia Paperweight to an iPhone, I decided to make a Note every time I received a comment. I did it the moment it happened and without any assessment. It could come from an intoxicated stranger whose toque obscured 90% of his vision and I would still file it away.

I tracked compliments (+) , criticism (-), and neutral comments (o). I divided them between physical and mental. I kept it up for about 6 weeks. 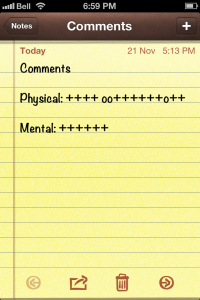 Yup, not one negative comment. I was actually legitimately surprised by that.

I don’t think I necessarily got away from the bullies. My brother still says things which are neither funny nor kind, but which have sadly become part of our dynamic. A few years ago I spent two years in a college program where I was surrounded by guys in their early 20s, and most of them were still casually abusive to each other (though a scattered few seemed to be growing out of it. One of the nicest guys in the program once cracked a joke at my expense, but almost immediately apologized and admitted it had been cruel. The apology was nice, but I still went home and cried that night).

I also haven’t necessarily stopped making fun of myself, though I make an active effort to curtail it. I’m better at telling people what is or isn’t okay to joke about (for example, I have issues with the word “bitch”. Some people will throw it around as a joke, or even a term of endearment, but I hate it. I would rather be called almost anything else, even a cunt, which most people consider to be a far worse term).

I also still think I’m fat (medically I am), ugly (though I’m beginning to recognize that it’s subjective), and awkward (in an endearing way). I am smart and musical, and I know it’s noteworthy because I’ve had people make a point of saying so. Sense of humour is also subjective, but the consensus seems to be in my favour on that one, too.

Importance… That one I’m still working on. It came up in therapy last night (and thus prompted this blog) and I mostly have trouble with it because prioritizing my own needs always seems to require de-prioritizing someone else’s. The friend who actively challenged me told me my needs were allowed to matter, but when I placed my needs ahead of her wants, I caught hell for it. I guess I have trust issues there.

This blog has gotten quite long, even by my rambling standards, but there isn’t an easily identifiable ending point to this topic. I haven’t achieved a specific goal here. I have, however, made progress. And sometimes progress is enough of an achievement all on its own.

***Title from Kathryn Stockett’s “The Help”

2 thoughts on “You is kind. You is smart. You is important.”