The Elephants in the Room

My mother loves elephants. I’m sure there are some days she wishes she’d kept that preference to herself.

Elephants are scattered all over our house. Some come from dear friends and have names and personal significance. Some were expensive and are kept away from sticky fingers when friends bring over their children. Some are cute, some are fancy. Most of them are in the living room, but some form or other, there’s at least one elephant in almost every room in our house. 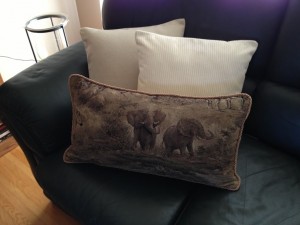 There are things my family never talked about. I could probably name a couple of topics and character traits for each of them (and I’m sure there’s a laundry list for me in each of their heads) which we all silently agreed never to bring up. Out of habit or necessity, I grew up in a house where there was always an elephant in the room. Usually a small herd. 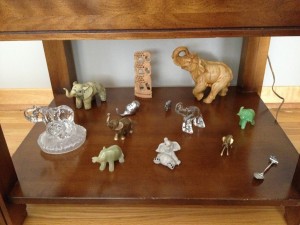 My parents and brother seemed to be able to handle that silence fairly well, or at least they never felt the need to do anything about it. I was never as comfortable with it. I inherited my mother’s love of pachyderms, but didn’t do well with leaving words unsaid, especially when I felt they need saying.

When I was in university I started writing letters. There are plenty of therapists and advice-giving laypeople who advocate writing letters and throwing them away. I didn’t throw mine away. I held onto them for a little while, and then I sent a very long, very intense one to my mother.

I moved away. I got worse, then better, then worse again. I got help and made progress, but fumbled at every step. At one point, almost every part of my life fell apart simultaneously and I realized I needed to send myself careening into a new direction if I wanted anything to get better. I applied for a college program which didn’t strike me as particularly practical but offered to teach me things I genuinely wanted to learn. There was just one problem: it was back in my hometown, and the only way I could afford it would be by living with my parents.

Admissions were competitive, but I was accepted. Still, the thought of moving back home was almost enough to make me turn the offer down.

There were a lot of uncomfortable conversations over the next few months. Secrets and resentments I’d held onto for years needed to be let out. Questions needed to be answered. Ground rules needed to be laid and compromises established. I was nervous — terrified, actually — that despite all the effort, there would be a stampede the moment I set foot in the door. 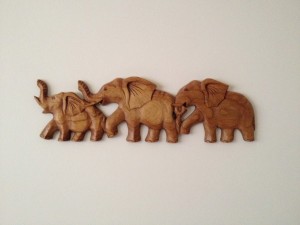 The first few weeks went well. The weeks became months, and those went well, too. Therapy and medication kept me more stable than I’d been in my adolescence, and a fuller awareness of my situation and needs gave my mother a set of guidelines she did her best to work within.

Things weren’t perfect, but nothing ever is. Things were good, and that was far better than I’d expected them to be.

I got a job within six weeks of graduation and relocated to Toronto. For two and a half years I lived and worked in The Big City, but in spite of all the ups, I couldn’t stay ahead of the downs. I stayed on top of some things by letting others crumbled, but when the foundations were at their weakest point, I didn’t have the energy to rebuild, and nothing else to let slide. I wanted so much to be fully functional, but no matter how hard I tried, I wasn’t. My sense of pride was loathe to admit it, but if I wanted to hold together what bits of myself I had left, something had to give. For me, that something was Toronto. I applied to work from home, and I moved back to London.

College taught me a lot of things about the music industry, copyright, business… and just enough about production and engineering to scrape by with a passable grade. But the most important thing I learned in those two years was how to make things work at home. I can live with my parents. I can even tolerate my brother. 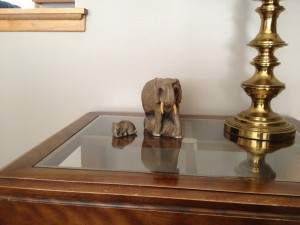 What I can’t live with — what I was actually afraid to come home to when I first applied to college — are elephants. My mother loves them, and she’s kept the ones made of wood and metal and plaster, but the ones made of secrets and unspoken words have been herded out the back door to make room for functional relationships and a house I can come home to.